Although it’s more commonly referred to as “tribalism” in business, workplace factionalism is a more precise phrase when discussing problems resulting from “us versus them” mindsets.

That’s because “factions” tend to be regarded as primarily divisive forces .

Workplace factionalism can result from a number of things, including:

All of these situations and behaviors can create problems, which can be exacerbated further when leadership styles clash between leaders of different teams.

Over time – and often due to a well-meaning sense of loyalty to their own supervisors, bosses and managers, subordinate team members can adopt entrenched, oppositional attitudes and behaviors.

When factionalism is allowed to fester, it can yield chronically dysfunctional relationships. Rival teams may not only struggle to work together but also struggle to work collaboratively with other teams and departments.

Can business leaders identify and eliminate this problem? The answer, fortunately, is yes.

Here’s how to spot and fix a dysfunctional team displaying signs of workplace factionalism.

What are the common signs of factionalism in business?

Any business will have employees who don’t get along from time to time. When there’s tension in the workplace, it can impact communications, collaboration and coordination throughout company.

Workplace factionalism can be the most extreme manifestation of this tension. An entire group of people within the business acts in ways that conflict with other teams – and ultimately may adversely impact your company’s strategy and mission.

Here are the most common signs of factionalism.

The effects of factionalism often aren’t egregious, easily punishable acts. Instead, minor choices accumulate and create a palpable tension and distrust between teams:

This occurs when groups display an “us versus them” mentality, overtly blaming others in the workplace for errors or problems.

Uncalled for criticism and blaming can turn cross-team meetings into toxic, emotional rollercoasters. And the negativity can even adversely impact single team meetings, too.

If your teams aren’t communicating well (or at all) and are routinely throwing metaphorical rocks at one another, then there will be natural inefficiencies.

Over time, crippling redundancies may arise where the two teams end up working separately on similar projects. This can result in chronic, debilitating misalignment in project messaging, strategy and delivery.

4. Refusing to work together

This is the most severe, recognizable sign of factionalism in business.

As an example, in an effort to bypass interaction, employees may solicit bids for work outside the company rather than use service teams within the organization. (This can take an unnecessary, avoidable bite out of your budget, too.)

Another potential hazard? Teams that fail to meet a critical deadline because they’d rather not work collaboratively. When the arguments and tension are this extreme, work productivity inevitably suffers. And clients may be lost.

As a consequence, employees may decide to leave rather than stay in a toxic situation. This, in turn, can lead to greater employee turnover, which can consume time and labor and result in lost connections and employer reputation.

Another problem factionalism can create? Factional leaders may associate with or seek to replace lost staff with people who think and look exactly like them, which can impact a company’s efforts to use workplace diversity as a business strategy.

When factionalism takes hold – and errors and inefficiencies follow, teams may be willing to find fault elsewhere for missteps or errors, placing blame even beyond the “other” people on their rival team. Instead of troubleshooting customer service or production issues, these employees may even try to place the blame on your most important person: your customer.

How can you prevent workplace factionalism?

To put it simply, the best defense against factionalism in business is prevention. Who bears responsibility for that? Ideally every employee should be willing to pushback on the harmful attitudes and behaviors described above.

But, as with so many aspects of company culture, supervisors and other, more senior leaders are the best defense against toxic workplace factionalism.

Although the following strategies might not be 100% effective in preventing the problem, they can help safeguard against it.

Create a clear code of conduct.

It seems obvious, but it’s actually critical to spell out exactly what behaviors you expect of your team members (and which ones you’ll address consistently moving forward) in plain language.

So, if your organization doesn’t already have one, create a code of conduct and ethics. This policy will detail the company’s expectations for how employees should behave, communicate and collaborate in pursuit of the business’ shared goals.

Setting clear expectations on what success looks like for your company helps set the tone for your business culture.

If you have a code of conduct in place and factionalism is taking root (or has already festered) in your business, then chances are people are ignoring it. Nonetheless, the code of conduct is something you can reference when working to correct the issue.

To right everyone’s course, a new, revised or simply revisited code of conduct discussion can serve as a useful benchmark, something to which everyone can be expected to adhere.

Moving forward, it can also be useful to hold people or teams accountable in clear, no-nonsense terms.

Create discussion forums for your employees.

If you’re in a more senior leadership position, you might not have a clear view into the day-to-day dynamics between teams. However, that’s no excuse for letting factionalism enter the workplace.

In fact, senior leaders arguably have more freedom and responsibility to influence behavior both through their own professionalism and the organizational systems and policies they help craft.

A straightforward way to tap into potential issues is to work with human resources professionals. They can help provide your employees safe ways to surface problems that, if unaddressed, might fester into run-of-the-mill negativity or a culture rife with workplace factionalism.

Strategies to address the problem can include, but certainly not limited to:

The goal? To give employees a voice so that you can short circuit factionalism by preventing it from building up.

How can you address factionalism in business?

The symptoms of factionalism typically manifest themselves at the team level.

But factionalism’s root cause is a failure in leadership.

When a team doesn’t work well with others, it’s usually because the team’s leader either set the factional tone or allowed the behavior to become the norm.

If you find yourself in this situation as a supervisor or middle manager, remember that you can be as instrumental in turning it around as you were in helping it take root.

To overcome these dysfunctional dynamics on your own team, follow these steps:

1. Be introspective about how you’ve divided responsibilities and held your direct reports accountable.

The first step must be for leadership to admit there’s an issue and commit to resolving it.

Answers to these questions may be hard to face, but they can also help you determine actions necessary to resolving the matter.

2. Seek intervention between the leaders causing the dysfunction.

Typically, it’s only a more senior leader who can step in and resolve tensions. That’s because a subordinate factional leader might not be sufficiently self-aware of her team’s issues or their impact.

When factionalism takes hold of teams that report to you, work to use your influence and authority to bring about a peaceful resolution.

The degree of intervention required will vary by company, but a basic stepwise approach might look like this:

Sometimes factionalism starts at the very top of the company. Who, then, tells the C-suite that they’re causing a culture problem? Intervention can come from board members or other internal corporate leaders who can offer consulting, training and support.

Also, when factionalism occurs at the most senior level, candid peer-to-peer conversations may need to take place in greater privacy to maintain confidence in top-tier leadership. And the discussions should also be undertaken by people (or the person) most apt to have the factional leaders respect going into the conversation.

3. Construct an environment of reconciliation across the teams.

In the wake of factional leaders being called out by a more senior manager, trust and morale between teams may be shaky. This is understandable, but again this is why a middle or top-level leaders commitment to resolving the matter is so important.

Once you’ve gotten your leadership team (your direct reports) aligned and agreeing to change the culture, you must also work on rebuilding trust and amiable relationships between the teams.

Create a scenario where once rival teams must publicly display their collaboration. Even if this is largely ceremonial, this show of unity can begin to change the tone.

Help team leaders align messaging around the new spirit of collaboration and cooperation. Have them announce the breakdown of silos using similar language. Because they work more closely with team members, it’s up to your direct reports to frame the environment and define their teams’ mission with clear expectations for outcomes.

Ideally, with the newly delineated responsibilities of the teams, you should consider initiating a project that requires the teams work together and makes the best use of their talents equally. This might be a work-related project or it might be philanthropic in nature, something that brings to light shared values of employees and the organization. (Ongoing corporate community involvement can be a great way to help foster cross-team collaboration moving forward.)

By avoiding an atmosphere of conflicting or unclear goals, managers can help set the tone for collaboration rather than destructive competition.

Finally, it doesn’t hurt to encourage people to have a little fun together – and get to know one another outside of emails and project meetings. Ultimately, the more team members see each other as humans (and not the member of a rival group), the better your teams will be able to collaborate.

Business factionalism could also lead to employee relations issues stemming from low employee morale, such as talent flight and difficulty in recruiting new employees. Managers and supervisors acting out of factionalism will often hire like-minded staff, potentially leading to a lack of diversity and inclusion across your organization.

As a leader, it’s up to you to make sure your culture supports your company’s mission, vision and values. If you’d like more ideas on how to strengthen the business culture in your organization, download our free magazine: Insperity guide to company culture. 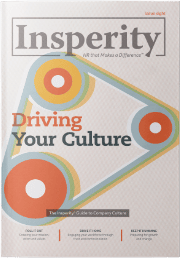 The Insperity guide to company culture