It’s a question with big ramifications that trips up many employers:

Is my worker an employee or contractor?

To help you figure out whether your workers are classified correctly, we’ll cover:

Employee or contractor: basic information to help your business

Become familiar with the Fair Labor Standards Act (FLSA), which defines what an employee is and what employer obligations are. If a worker meets the requirements for an employment relationship, they can’t be an independent contractor.

How you decide to classify workers is of great interest to the Department of Labor (DOL) and the IRS. The distinction between an employee or contractor impacts major aspects of the worker experience, such as:

(More details about what you need to know to properly classify your workers can be found in the U.S. Internal Revenue Service (IRS) 2020 Employer’s Supplemental Tax Guide. Additionally, on Jan. 6, 2021, the U.S. Department of Labor (DOL) announced a final rule for clarifying how to determine whether a worker is an employee under the FLSA or an independent contractor.

The consequences of misclassification: DOL audits and penalties

The Labor Department’s Wage and Hour Division is the primary enforcer of FLSA provisions relating to worker classification. Its purpose is to ensure that workers are paid and treated fairly.

In recent years, the DOL has begun cracking down on companies that either purposely or unintentionally misclassify their workers. To this end, inquiries into the number of 1099s distributed by companies have increased sharply. Today, most DOL audit questionnaires ask this very question.

In taking these actions, the agency is trying to determine whether there’s an overabundance of independent contractors working with your company, which raises red flags and triggers an audit.

There are two types of DOL audits:

The DOL doesn’t have to suspect any FLSA violations to investigate your business. They can show up at any time, for any reason, to conduct an audit. Be prepared.

Should a DOL audit happen at your company, you’ll have to take valuable time away from your business to cooperate with their processes. If the DOL finds that you made an honest mistake in classifying workers, you’ll have to:

But if the DOL concludes that you intentionally misclassified a worker or violated the law repeatedly and willfully, financial penalties are $2,050 per violation. This means that you’ll be fined $2,050 for every time that a worker should’ve been paid as an employee.

If you do the math, this figure adds up quickly.

To prevent a negative scenario with the DOL or IRS and accurately classify your workers, learn about the most common mistakes you should avoid.

Mistake 1: Not considering all aspects of the company-worker relationship

To properly classify your workers, you must consider all aspects of the worker-company relationship. You shouldn’t base your classification decision on only one factor.

After all, the U.S. Supreme Court has, on a number of occasions, indicated that there is no single rule or test for determining whether a worker is an employee or contractor. The court has stated that it’s the total activity or situation that controls the classification.

In determining whether a worker is an employee or contractor, evaluate the amount of control over the details of the work performed.

3 categories that the IRS considers

1. Behavioral: Does the company have the right to direct or control how a worker does the work?

Consider whether workers receive extensive instructions on how work is to be done. Examples:

Also consider whether a company provides a worker with training about procedures and methods.

If a company gives detailed instructions and provides training, that’s a good indication the worker is an employee.

2. Financial: Does the company have the right to direct or control the business part of the work?

Look at these factors:

A worker spending their own money and not receiving reimbursement, and incurring profits and losses, is indicative of a contractor.

3. Type of relationship: What are the facts that demonstrate how the company and the worker perceive their relationship?

Does the worker receive employee benefits, such as insurance, retirement savings plans or a pension and paid leave?

Is there a written contract describing the relationship?

The U. S. Supreme Court’s criteria

To further clarify, the U.S. Supreme Court has listed these factors as significant in classifying workers:

Now let’s use an example. Upon discovering a plumbing issue in their facility, Waffle World hires Bill Jones, a local plumber, to unclog their drains.

Based on these facts, how should Bill be classified?

Answer: Bill should be classified as an independent contractor.

However, if Waffle World considered only his recurring employment and monthly wage, he could be wrongly classified as an employee.

Some employers believe that a signed contract defining a worker’s classification supersedes all other considerations. This is not the case.

According to the IRS, the facts of the relationship between a company and a worker determine how the worker should be classified – not what is stated within a written contract. It doesn’t matter if the contract is drafted by an attorney, signed and notarized.

Let’s use another example with Waffle World. The company hires Jane Smith as a batter mixer on its production line.

All of the above facts point to Jane’s classification as an employee.

Even if she and Waffle World have a written contract between them stating that she’s an independent contractor and is personally responsible for paying her self-employment tax, it won’t be recognized by the IRS when her worker status is evaluated.

As noted previously, the IRS defines a significant investment in job training and equipment by the worker as representative of an independent contractor.

Both employees and independent contractors may invest to some degree in the tools and materials they use for their jobs. The difference in classification depends upon the size of the investment and factors such as whether the company reimburses the worker.

This can cause confusion, because there’s no precise numerical value for what constitutes a “significant investment.”

Although the company provides Jane with a uniform and tools for her mixing job, perhaps she prefers to wear a hat and gloves while mixing. However, these items aren’t provided by Waffle World because they aren’t necessary for Jane to perform her role.

Nonetheless, Jane decides to purchase a hat and gloves with her own money. These purchases wouldn’t be deemed a significant investment. Even if Waffle World reimbursed Jane, it would still be accurate to classify her as an employee.

On the other hand, Bill’s significant investment in his plumbing tools and service vehicle, for example, indicate that he should be classified as an independent contractor. In this case, Waffle World isn’t required to reimburse Bill for anything other than the work he does for the company.

You must use your best judgment and consider all factors of the investment and the entire company-worker relationship before making a final classification.

Typically, an employee is paid a regular wage for a determined period of time (even with commissions or production incentives to supplement). Often, this is an hourly wage.

Independent contractors are often paid a flat fee for a job.

Confusion lies in situations in which independent contractors may be paid hourly.

For example, Jane the batter mixer on the production line, is paid $500 per 40-hour workweek. Bill, the plumber, is paid one $600 lump sum after he completes the job of unclogging Waffle World’s drains.

But what if the arrangement with Bill is changed so that he visits Waffle World once per month and is paid $50 per hour for the time he spends flushing out the drains?

Although he’s paid an hourly fee versus a single lump sum, the other aspects of Bill’s work relationship still probably indicates his classification as an independent contractor.

Employees are usually provided benefits from their employers. For example:

However, this isn’t always the case. The lack of benefits doesn’t mean that a worker isn’t an employee. Unless when required by law, such as the Affordable Care Act mandating that employers provide health insurance in certain circumstances, companies aren’t obligated to provide benefits.

Some employers mistakenly believe that they have the choice of:

While this practice isn’t uncommon, it’s difficult to defend.

But because Bill is an independent contractor, Waffle World shouldn’t provide benefits to him.

It may be true that many companies within a specific industry tend to treat certain workers as independent contractors or employees – regardless of the facts of the working relationship. This is done because it’s advantageous for the company in some way or that’s what workers prefer. It may just seem like “the norm” for companies like yours.

But if the worker classification is wrong, you’re all wrong together and will still face the consequences if audited. “Everyone else is doing it” isn’t a valid defense against a DOL audit.

Deciding whether a worker is an employee or contractor can be tricky. Remember:

When in doubt, engage an employment attorney specializing in wage and hour issues to help your company.

Misclassifying workers can be a costly mistake. To learn how to steer clear of other common HR errors, download our free e-book: 7 most frequent HR mistakes and how to avoid them. 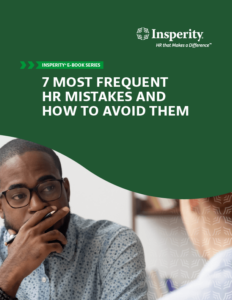 7 most frequent HR mistakes and how to avoid them