We all have biases about people that play out in our everyday interactions – and we’re often unaware of them.

These biases are rooted in our upbringing and life experiences, as well as external factors such as what we consume in movies, TV, social media and the news.

Unconscious bias in the workplace can be a problem when it negatively impacts people and their ability to thrive and succeed in their careers.

What is unconscious bias?

Unconscious bias is a preference for or disinclination toward certain qualities in another person, such as (but not limited to):

Bias is expressed in the way we think about (stereotype) and engage with others. It can be so ingrained within us and relied upon so automatically that we may  be unconscious or unaware of its effects on our thinking or engagement with others.

How can unconscious bias affect the work environment?

It can exist between peers occupying similar levels of an organizational hierarchy, as well as between managers and subordinates.

Managers’ unconscious biases can be especially troublesome, as they have the potential to lead to arbitrary advantages for some and unfair disadvantage for others.

Other undesirable consequences of unconscious bias in the workplace include:

Proactively, many companies have begun to implement measures to reduce unconscious bias when hiring. But what happens after a hire is made? How can business leaders avoid unconscious bias during the lifecycle of an employee’s employment?

1. Don’t: Continually select the same go-to people – the employees you know best or personally like the most – for projects, exposure opportunities, advance trainings or promotions.

As a result, you might be overlooking the potential in other employees that you haven’t paid as much attention to. This can stir up resentment on your team and lead to questions about why some employees are given additional, career-boosting attention and resources.

People will notice if they’re continually passed over for “the favorites,” and they can become discouraged and disengaged.

Do: Select employees whose skill sets and expertise most closely align with what’s needed to take the project to completion.

Make a list of strengths and weaknesses for each person on your team, and then compare it to the project requirements and objectives.

Ask yourself questions such as:

Create an environment in which all employees can gain access to resources that can aid them in their career progression, whether it’s:

To find out what your employees want and engage with them on an individual level. This is often where leaders stumble: They don’t spend as much time talking to people they don’t connect with.

Rotate the employees you assign to projects, exposure opportunities and advance trainings to give everyone an opportunity to participate and to keep all team members engaged.

2. Don’t: Promote arbitrarily, without first announcing the opportunity to your entire team.

Other employees – especially those with similar experience, skills and company tenure could get upset that they weren’t made aware of or even considered for promotional opportunities.

They may wonder whether their colleague’s promotion was truly based on justifiable business reasons, such as performance, skill, merit or expertise; or if the promotional selection was biased or discriminatory.

Do: Take these steps to avoid being accused of discrimination against others when promoting:

3. Don’t: Praise the same people repeatedly because you pay attention to their work more or be inconsistent in how you show appreciation for employees.

Employees who rarely, if ever, receive your praise can feel ignored and unappreciated compared to “the favorites.”

Do: Be consistent in how employees are praised and acknowledged.

Be mindful of whether you’re praising publicly or privately and apply the same method toward all team members. Remember, for many employees, recognition of the work they do is nearly as important to them as the work itself. Most people want to be acknowledged when they perform well.

Establish an employee-recognition program to set objective criteria for what constitutes praiseworthy behavior and what recognition entails.

Here are a few options in how you could choose to apply consistency:

If you take an extra step beyond words of praise and choose to give employees actual rewards – say, a performance bonus or an extra day off, this needs to be included in the recognition program or policy. Everyone needs to understand the available rewards and the criteria to earn them. Whenever an employee earns a reward, document why.

Encourage peer-to-peer recognition. Recognition from colleagues is just as powerful as managerial recognition. In this case, recognition is about what other members of the group – as opposed to a single manager – notice and choose to acknowledge.

4. Don’t: Be aloof with employees you don’t connect with as much as others.

This can cause employees to feel disliked, ignored or unsupported for reasons they don’t understand.

Do: Give everyone on your team equal attention.

Consistently solicit the input of each employee or give everyone the opportunity to speak up.

Establish an open-door policy in which all employees feel empowered to come speak with you about concerns or questions they have and seek face-to-face time with you.

The reality is, we’re all human and there will always be people we’re naturally more drawn toward. But there should be a level of balance in the way we engage with others. Leaders should display emotional intelligence, which in the case of unconscious bias in the workplace involves:

This opens you up to complaints about unfair treatment – which very well could have merit if you’re allowing unconscious biases to influence your decision making.

Do: Document all workplace policies in your employee handbook.

That’s not to say that there’s no room for flexibility. For example, an employee could have a legitimate reason for attendance issues or a dip in performance quality. Another employee could behave in such an appalling way – for example, physical assault or theft – that you could bypass the initial steps of the disciplinary process and terminate them on the spot.

But these instances – as well as each disciplinary conversation with an employee – must be thoroughly documented to explain any perceived disparities in treatment. It’s also a good idea to include another party, such as an HR professional, in the disciplinary process to diminish your potential for unconscious bias in the workplace.

6. Don’t: Host a meeting or social gathering, and then fail to invite all employees who should be there.

Leaders who do this look like they’re trying to exclude people, even if it was unintentional.

Make this a rule:

Informal gatherings among colleagues – lunch outings or after-work happy hours – are more of a gray area. It will always be the case that people who connect will choose to hang out together in their free time.

As a leader, you’ll want to make sure that this behavior doesn’t lead to the formation of cliques in the workplace, which can make those who aren’t in the circle feel left out.

Reach out to those employees you may not have otherwise invited to lunch or happy hour to get to know them better on a personal level. Encourage your team members to do the same with their peers, with the goal of building relationships and camaraderie.

The challenge: Identifying and confronting your specific unconscious biases in the workplace

How do you recognize biases if you’re unaware of them to begin with?

Regular participation in diversity and inclusion training, where identifying unconscious biases is a part of the training curriculum, is one way to do so.

Unconscious bias training will offer techniques in uncovering specific biases and may even involve taking tests that reveal mental associations that we may otherwise be unwilling or unable to detect. One popular example of such a test is the Harvard Implicit Association Test (IAT).

While it may be uncomfortable at first within your team, continually engaging in conversations that encourage introspection and reflection may also help to confront and minimize unconscious bias in the workplace.

Overcoming unconscious bias in the workplace can be a challenge because it’s often an enemy we don’t see or have an awareness of within ourselves. But for those who suspect they’re on the receiving end of bias, it can lead to many problems with morale, engagement and turnover, and be a prime source of discrimination charges.

As a general, ongoing practice, think through the ways in which you engage with team members to assess how you can mitigate the appearance of preferential (or unfair) treatment and infuse more neutrality in these interactions.

To uncover your specific biases and increase your own self-awareness, consider participating in regular training and taking a test aimed at revealing implicit associations.

For more information on becoming a more effective, fair and empowering leader, download our free magazine: The Insperity guide to leadership and management. 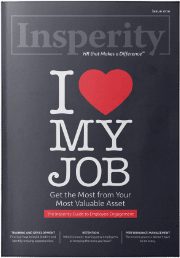 The Insperity guide to employee engagement