Shifting your thinking to be able to learn from failure is one of the hardest lessons for most business leaders, but it’s also one of the most essential.

We try to accentuate the positive side of mistakes by promoting sayings such as:

Sounds good in theory, right? The problem is, most people try to avoid making mistakes because mistakes don’t feel good or feed our egos.

Attempts to avoid mistakes get compounded because generally, success is rewarded in business – not failure. We say we want innovation and creativity from employees, but bonuses are given for meeting targets, not missing them.

So, what can you do to embrace failure for the lessons it provides, learn from it and move on stronger and more prepared to face new challenges?

Start with these six tips.

Every leader wants to be successful. Nobody goes into business to fail. But, to truly find deep, long-lasting success, you must learn to both anticipate failure and own it when it happens.

When faced with a task you’ve never done before, expect failure and seek the advice of colleagues and peers who may be more experienced in this area. Talk to other people who’ve handled similar projects, and ask them about lessons learned and what situations you should anticipate (and plan for).

In the military, they plan for failure through after-action reviews. This structured debriefing process helps a team analyze what happened, why it happened, and what can be done better next time. This information is then used in future projects and events.

Chances are, no matter how much testing you do beforehand, customers will find a way to break your beloved new widget or use a service in unintended ways. Then what?

Instead of getting frustrated by customer complaints or deciding the service has failed, consider this an opportunity to learn new uses for your product that hadn’t occurred to you before. Maybe through your failure, you’ve found a previously unidentified niche market.

To succeed after a bad business decision requires a mental reset.

Rather than dwelling on your mistakes and getting mired in negative thoughts, you have to learn to turn a mistake into a powerful asset that sets you up for future success.

Remind yourself that no one is perfect. If perfection is the standard, then you’re creating an unhealthy environment where fear of failure will outstrip your or your employees’ ability to be creative and find solutions.

Consider the example of new product design. If you create a product but don’t test it to learn where and how it breaks, you probably aren’t going to deliver a game-changing product. You’re probably selling clients something that will frustrate them when they break it.

So, you need to be the first to break it.

Breaking your product deliberately gives you a chance to find weaknesses and create solutions that, in turn, will help you build a stronger product that will delight your customers. Making mistakes in business works much the same way, so embrace the process of growing and learning.

When it comes to failure, the biggest chance for learning and growing comes in the response.

Think of it this way: Muscles that don’t get used become weak. The same holds true for mental growth. Responding to a failure builds leadership muscles and skills.

When you learn from failure, it forces you to think creatively, to fight, to find new ways to motivate your team or explore solutions you hadn’t considered before. Conversely, staying in failure mode only invites more failure.

Instead, remind yourself that you aren’t the only one who’s ever failed at whatever you’re doing.

All great leaders, from Winston Churchill to Bill Gates, failed miserably at one point. And most of them failed a lot more than once. But they eventually succeeded and are thought to be great leaders because of their response to those failures.

Ironically, success can actually be a block to learning because, when things are successful, we rarely stop to reflect and analyze why things are good. To sustain success, you must understand what’s working and what’s not.

Failure provides the perfect opportunity to do just that.

It’s human nature to want to hide a failure. However, covering up or ignoring a mistake prevents learning and opportunities for future success. It also keeps you from being accountable or fully transparent with employees and customers.

So, don’t try to cover them up. Instead, face your failures and get to know them on an intimate level.

Say, for example, your company launched a new service that tanked in the first six months. Rather than accept failure, or blame the market or your team, dig deeper and ask exploratory questions such as:

Remember, for failure to be a better teacher than success, you have to be willing to analyze what went wrong and take corrective action.

It can be hard to open up and talk about your past mistakes, but sharing what you learned from failure can help others facing similar problems in your company.

If you found a way to turn a mistake into success, you can help others in your organization repeat that success.

Share the lessons you learned, your tips and tricks, your perspective on a situation, and the things you do first and last when faced with a similar problem. Doing so helps your organization replicate good leadership.

By coaching others through failure, you help build their confidence and motivate them to try again.

Yes, you read that right.

Every failure includes nuggets of success if you look for them. As a leader, it’s vital you find and celebrate those things that went right.

For instance, maybe your team didn’t make their sales goal this month. But in the process, maybe they learned to close deals faster or discovered a new market with loads of potential.

That’s a win for the whole organization, so claim it as such.

Or, maybe you were given a stretch project that required you to oversee a larger budget than you’ve ever managed before – and costs got out of hand. Instead of dwelling on the negative, focus on the positives gained.

What did you learn from the experience? How will it make you better prepared for overseeing larger budgets down the road?

Accept that you and your employees will make the occasional misstep – sometimes many – as you pursue new markets or create new services. And when you do, analyze what you did right, as well as what you did wrong, and file those lessons away for the next assignment.

Don’t let management mistakes get you down. Learning from failure can help you consistently improve as a leader. For more tips on how to develop your leadership skills, download our free e-book, The Insperity guide to leadership and management. 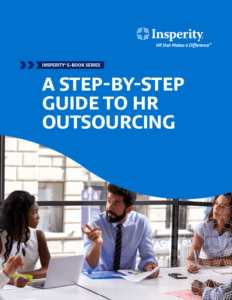 A step-by-step guide to HR outsourcing