Many businesses leaders, managers and co-workers fail to appreciate subtle or less aggressive behaviors that others can perceive as harassment, discrimination or the creation of a hostile work environment.

How can you, the leader, avoid situations that may choke productivity or get individuals and the company into legal hot water? Here are potential problem situations to watch out for.

Bryce may see nothing wrong with hanging a picture of his wife in a bikini or Confederate flag on his cube wall. Susie may feel it’s important to express her religious beliefs by keeping a Bible on her desk and several crosses for décor. However, fellow co-workers or visiting customers may be offended or feel uncomfortable about such displays.

Your employee handbook should outline what is allowed for decoration of individual workspaces, and you should quickly react to any décor outside acceptable standards.

Remind employees that they are in a place of business, that the desk they use at work is company property, and the company reserves the right to ask for the removal of any décor at any time for any reason. Any personal items or décor must be professional, respectful and not likely to be construed as offensive.

Jokes can be a tricky thing. What you may find amusing could be terribly offensive to a co-worker or subordinate. Plus, humans often use humor as a cover for hostility or for creating an in-crowd vs. “the others” feeling in a group.

You don’t have to tell your off-color joke directly to the offended party for it to be legally dangerous. Overhearing a joke can be just as damaging as being the direct recipient.

A good rule of thumb: If your joke makes fun of someone for their gender, age, race, nationality or religion, it’s better to keep your funny bone to yourself. If someone else is making the joke, you should find a way to point out why the joke isn’t acceptable office banter.

Employees who are telling inappropriate jokes should be reminded that the company promotes an environment of respect and professionalism and that any use of language or jokes could be a violation of company policy or the law.

People can be highly creative in their labels and euphemisms, but it’s nevertheless insulting to label someone. Seemingly innocent catch-phrases or distinct stereotypical descriptors that may make someone uncomfortable could be fraught with legal dangers for the company. Equally problematic is the supervisor who consistently treats (blatantly or overtly) a certain group of people a particular way.

Generally, if a supervisor seems to always find fault with subordinates of a particular gender or race, pay close attention. This manager may need coaching about his or her biases and how they may affect the company’s culture or cause potential liability.

Your company is obligated to protect your employees from the unwanted advances, off-color jokes and threats made by vendors, customers and consultants, just as you are responsible for protecting them from such behavior from a co-worker or manager.

So, if Vendor X offers a discount in exchange for a date or sexual favors, you must take the behavior seriously, do a prompt and thorough investigation and take appropriate action. Consult a trained professional (such as an HR consultant or attorney) to ensure the investigation and your reaction is handled properly.

It’s equally indefensible to say, “Oh, we always joke around here.” Or, “They never said they were offended or uncomfortable.”

Employees will often wait until the offensive behavior has happened several times before complaining and often management will participate in or turn a blind eye to certain conduct with the hope that if they ignore it nothing will come of it. That doesn’t mean the person didn’t feel harassed or discriminated against the first time. Or, they may tie their own, everyday reality to an outside event, such as the recent Charlottesville riots, by deciding it’s time to speak up.

Ignorance of the law doesn’t protect your company from bad behavior. Be on the lookout for employees who laugh nervously, don’t laugh at all, or display body language that indicates discomfort during a conversation. These could be signs that you need to intervene and change the tone or investigate the situation further.

But first and foremost, if you, as a manager, think the conduct is inappropriate, use your first instinct and proactively address the behavior before someone complains – even if you were not offended yourself.

Sometimes behavior goes on for so long that managers and co-workers excuse the bad actor by saying, “Oh that’s just Joe – he says that to everybody.” Or “John is our top producer, we can’t address his behavior” If that’s the case, stop making excuses now.

Just because you’ve got an equal opportunity offender on your hands, doesn’t mean you can’t be held liable for allowing a hostile work environment or harassing behavior to go on.

It’s the same with your star performer, John, who also happens to tell off-color jokes or use disparaging language when talking about or to colleagues. Consider what he may be costing you in lost productivity because people avoid working with him and resent that his behavior goes unchecked.

It’s a flawed rationale to think that these subtler, less overt forms of discrimination or harassment aren’t hurtful to your employees and your company. Unchecked bad behavior of any type can cost your company, not just in legal fees, but in higher turnover, increased sick days and more.

Learn more about how to avoid legal snafus at your company. Download our free e-book, Employment Law: Are You Putting Your Business at Risk? 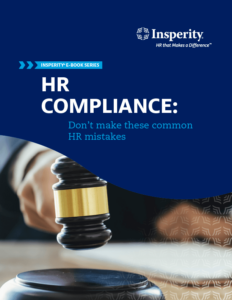 HR compliance: Are you putting your business at risk?