What should you be looking for in job candidates as a predictor of future success? Is there a personality trait that stands out more than others?

Grit has become the new soft skill that every business leader seeks in new hires.

In a personal setting, grit is often defined as courage, resolve or fortitude – and as hardworking or passionate in a professional setting. It’s having the perseverance and passion to remain committed to long-term goals even when you feel like throwing in the towel.

Whatever you call it now, when it comes down to it, this intrinsic, unyielding drive and dedication may be an even more valuable quality among job prospects than their IQ, GPA or other criteria listed on a job description.

Just ask Angela Lee Duckworth, professor of psychology at the University of Pennsylvania. In her popular TED talk on Grit: The Power of Passion and Perseverance, she says that grit is a better determinant of success in school children than almost any other measure she could find.

Grit on its own is a powerful trait. But grit with resilience is an unbeatable combination in a job candidate.

First, let’s sort out the difference between grit and resilience. These two are close cousins, but they’re not exactly the same.

Grit is defined by a no-quit mentality. It’s having the intestinal fortitude to push forward no matter what. Resilience, on the other hand, is getting back up when you fall. It’s the ability to recover and learn from challenges and to see failure as an opportunity for improvement.

Imagine the possibilities when you have both qualities in the same person.

So, once you’ve decided you need to hire employees with grit – and, ideally, resilience – how do you identify this characteristic during the interview process? What overt signs and subtle clues should you be looking for in job candidates?

How to identify grit in job candidates

You and your hiring managers may be happy to know that some standard interview questions used to detect soft skills, such as communication, decision-making and problem-solving, can also be used to pinpoint candidates with grit and resilience.

Just as with any interview question, you want to listen carefully to the answers you get. You want specific descriptions and an appropriate level of detail from the candidate as they tell their stories.

Another clue that a job candidate has grit: They showed up on time and prepared for their interview. After all, if they don’t have the passion to nail this interview, what are the chances they will possess the determination to be prepared for a board presentation or client meeting?

When the tough get going

Much like the young girl determined to avenge her father’s death in the movie True Grit, the gritty, resilient employee remains focused and determined to meet their goals and self-correct along the way.

However, it’s important to understand that resolve doesn’t look the same in every person or every job.

Grit in a salesperson may mean they don’t get discouraged to hear “no” nine times before they hear one yes. Grit in a receptionist may be the ability to remain pleasant and efficient while juggling a busy phone, a FedEx delivery and a room full of waiting clients.

A roofer with grit would probably have physical stamina, while a software engineer working for a start-up needs mental tenacity.

And there’s no better example than the grit in military veterans.

For instance, the Navy SEAL program is considered to be especially grueling. It’s well known that physical abilities are vital to success in this military job. However, Inc. magazine explains that tremendous mental toughness may be even more important to survive the rigorous training.

While you may not need a Navy SEAL level of grit in your employees, you do want people who won’t collapse at the first sign of adversity. You’re looking for employees who will work on a problem day after day, week after week – or even month after month – without getting discouraged, until your company finds an answer.

All this said, you don’t want to seek out people who take grit too far. Being abrasive or stubborn to the point of immovability isn’t going to be any better for your company than someone who gives up too easily.

Further, the person you hire still needs to have basic skills and qualifications, plus genuine talent for the job for which they’ve applied. Grit isn’t intended to replace basic job skills and abilities, but rather complement them.

While it may be tempting to think that anyone can learn any skill, the fact is that many jobs require specific skills or levels of specialization. For instance, a registered nurse needs at least a bachelor’s degree, a state license and the desire to help others with their health care.

Now that you have a better idea how to recognize grit in job candidates, what about your existing employees? Don’t forget about the people you’ve already hired.

You may be able to help current employees develop or increase their grit and perseverance a few ways. Some of this includes basic people management, such as:

The fact of the matter is that success of any type takes time, hard work and an ability to see past current hardships. That means grit is likely the number-one characteristic you should look for in your next new hire.

Grit is just one of many qualities you need in good employees. To learn more ways to ensure your workforce is the best it can be, download our free magazine, Building a better team: How to attract, recruit and hire top talent. 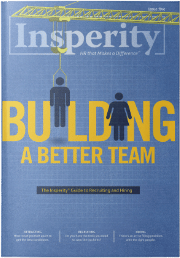 The Insperity guide to attracting, recruiting and hiring top talent